This online shop is using cookies to give you the best shopping experience. Thereby for example the session information or language setting are stored on your computer. Without cookies the range of the online shop's functionality is limited. If you do not agree, please click here. x
You are here: / Softline
Back to overview

Previous product Product 23 of 32 Next product 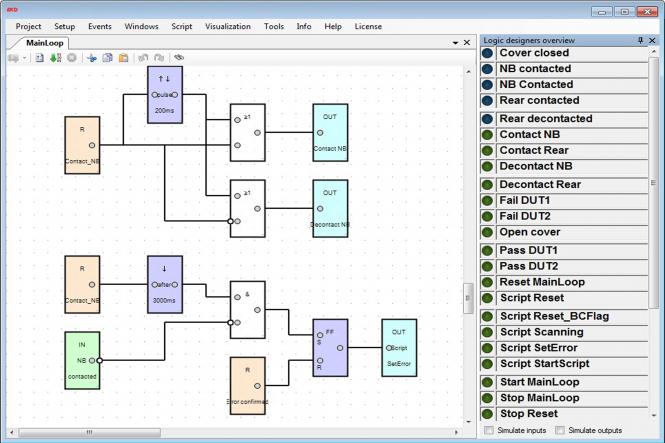 The Logic Designer permits the graphical programming of inputs and outputs in MCD Toolmonitor setups.
General logical relationships between inputs and outputs can be implemented.
Here, any value that can be queried in MCD Toolmonitor using the GetValue command can be defined as an input, and any value that can be set with the SetValue command can be defined as output.
These inputs and outputs can then be logically combined using logical components.
If there are no inputs or outputs available, they can still be simulated for testing.
It is also possible to connect the Logic Designer with variables, functions, and events from the script engine.
The Logic Designer was developed to fulfill the idea of integrating mechanical processes easier to test procedures.
Remote control access to the Toolmonitor is also possible. More information on the product